Lithuanian artist and composer Mikalojus Konstantinas Čiurlionis (1875-1911), a unique figure in the history of European arts, has left a profound imprint on Lithuanian culture. 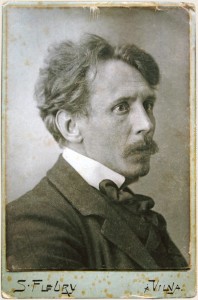 Judging by the breath of his artistic activities and diverse interests, Čiurlionis can be seen as a truly Renaissance individual. Over a short, mere decade-long career, he composed nearly four hundred musical compositions, including two large-scale symphonic poems, an overture, two piano sonatas, a string quartet, and a cantata for chorus and orchestra.  During those same brief years he also created approximately four hundred paintings and etchings, as well as several literary works and poems, while still finding time to experiment with art photography. Notes from his study years at the Warsaw Institute of Music show his interest in geology and history, chemistry and geometry, physics and astronomy, astrology and ancient mythology, dead and modern languages, philosophical ideas of antiquity and modernity, eastern and western religions.

On the other hand, his active involvement in the Lithuanian national movement and his idealist self-sacrifice for the sake of artistic ideals show him as a typical artist of the Romantic mold. During his short life, Čiurlionis managed to be at the heart of the creation of the Lithuanian Artists Union and actively organized and participated in the first three exhibitions of Lithuanian artists, organized and directed Lithuanian Choruses in Warsaw, Vilnius, and St. Petersburg, and was the first Lithuanian professional composer not only to take interest in Lithuanian folk songs, but to collect and publish them. His passionate approach to life is perhaps best summarized by his refusal to accept an offered safe teaching position at the Warsaw Institute of Music, and his declaration in a letter to his brother that he intends “to dedicate to Lithuania” all of his “past and future works.”

In addition, in following the German Symbolists in his paintings, exploring synaesthetic ideas, fashionable at the time, and exploring chromatic and harmonic possibilities of the tonal major-minor system in his music compositions, Čiurlionis stands as typical artist of the late Nineteenth-early Twentieth century Europe.

Finally, his latest mature paintings, based on intricate musical compositional techniques, and piano compositions in which tonal writing is blended with proto-serial techniques and constructive use of short rhythmic, melodic and harmonic complexes, stand as examples of totally unprecedented plastic-aural experiences unique in the history of European art.