Mikalojus Konstantinas Čiurlionis was born in 1875. A few years later American Thomas Alva Edison invented the phonograph, a devise for recording and replaying sound. In his recollections about his study years in Warsaw (Muzikos žinios, 1967, No. 4) Aleksandras Aleksis-Aleksandravičius mentioned the fact that in one concert by Warsaw Lithuanians’ choir something was recorded on phonograph. It is known that the aforementioned choir was formed by Čiurlionis in 1905, however it is not known whether the phonograph existed in 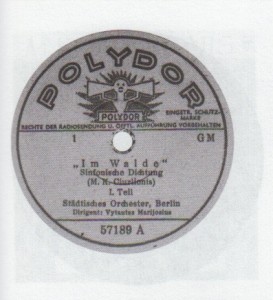 Warsaw at the time, and in Aleksandras Aleksis-Aleksandravičius’ study years Čiurlionis was no longer alive. In Riga in 1907, A. Kačanauskas with a group of singers made the first Lithuanian gramophone records. […] Nevertheless, it is not known, whether Čiurlionis had any opportunity to learn about the phonograph, which in time was improved and was widely used as the gramophone. […]

Prof. Vytautas Marijošius recorded the first record of Lithuanian symphonic music, Čiurlionis’ Symphonic poem In the Forest performed by Berlin City Orchestra. Unfortunately, this recording perished in Hanover during the bombardment in the WWII. Only a few records survived featuring a fragment of the first movement – seven minutes of Čiurlionis’ music…

Music for piano constituted the main body of Čiurlionis’musical output. […] For the first time the author of these lines […] heard Čiurlionis’ music outside of Lithuania, when in a cold winter of 1944 Andrius Kuprevičius, then continuing his piano studies in Germany, gave a memorable concert for Lithuanians of Dresden in an unheated hall. In 1949, while in Argentina Kuprevičius made a gramophone recording of Prelude in B flat minor (VL 269). Made 38 years after the composer’ death, this was the first recording of Čiurlionis’ piano music. In 1953, on his concert tour in the US, Kuprevičius recorded an LP of Čiurlionis’ piano music in Cleveland. […]

When considering Čiurlionis as the originator of the Lithuanian instrumental music we often forget, that he also was interested in vocal music, in particular the Lithuanian folk songs. In fact, song Šėriau žirgelį was recorded in 1924, when the representatives of Odeon Records, the International Talking Machine Company in Berlin, brought the recording equipment to Kaunas and recorded Šauliai Association 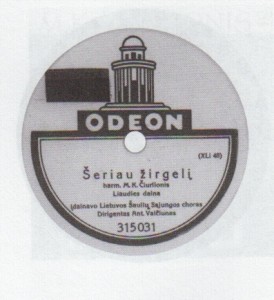 Choir led by Antanas Vaičiūnas, one of the most competent Lithuanian collectives at the time.  Thus, when crediting Marijošius and Kuprevičius for the first recordings of Čiurlionis’ symphonic and piano music, one should not forget that Vaičiūnas and his choir made the very first recording of Čiurlionis’ music in 1924.

After this late and slow beginning, today [before 2000, ed.] Čiurlionis’ music recordings released in 16 countries and four continents amount to 900. Some of them were repeatedly reissued in other form or were taken over by other producer. […] Noteworthy is the fact, that the list of recording artists includes foreigners who, having been enticed by Čiurlionis’ music, perform and record it. They can be found in Israel, Norway, Latvia, Sweden, Australia, Finland, Germany and other countries.[…]